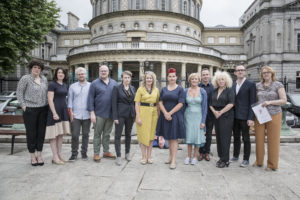 Thomas: Hi, my name is Thomas

Thomas: We were on the Children’s Council 2018, which just finished.

Hazel: The Children’s Council is a group of about 30 children from in and around the Dublin Area.

Thomas: We help The Ark by doing fun and creative and activities and sharing our ideas together.

Hazel: We would like to talk to you about why The Arts are very important for children. Hazel Lavery

Thomas: If children were architects and could design stuff, the world would look very different

Hazel: The Arts are lots of fun and every child has the right to have fun. Without creativity, life would be very boring. Nothing would be interesting or have colour. Hazel Lavery

Thomas: The Arts help us all to keep learning, even you adults, no offence! There’s no such thing as being wrong in The Arts, it’s your thing … it’s your creation

Hazel: We are lucky to get to see so much art as children and we wish that every child in Ireland could have the same opportunity.

In the early 90s in my mid-teens I saw installation of James Coleman’s ‘Strongbow’ in the Irish Museum of Modern Art. I felt like I could hardly breathe in this claustrophobic, hot, blacked-out room, with a barely perceptible effigy of Strongbow’s tomb in one corner and a boxy monitor in the opposite. It was the most exciting artwork I had ever seen. On the screen was a strobing, jarring image of a red and a green hand frenetically clapping, the sound was violently loud. It was an intense sensation to be transfixed by this thing I didn’t understand. Slowly this powerful truncation of a long history of seemingly intractable Irish problems revealed itself and astonished me. Around that time I made the amazing, simple discovery that in this country if I went to art college I could become an artist.

I was fortunate because the conviction that art is fundamental to everyone’s capacity to have an interesting, thoughtful life was gifted to me at a very young age. The question of whether art is important never troubled me, but it is of course necessary to ask why.

We are living through extraordinary change and change is easily perceived as a threat. Similarly difference is readily mobilised by people as a reason for enmity. Much contemporary visual art is predicated on a powerful, simple impulse to understand difference or change as an opportunity to have a conversation, a reason to communicate.  Much of the change we all face is led by very small sections of the population, it is taking place in other countries, in locations that are invisible or inaccessible to the public at large. I believe we need people who are publicly expressing the implications of this change. People who are excited, not intimidated, by difference.

People may still have a romantic attachment to the idea of the artist as an outsider. But in reality many artists enjoy incredible access to the multiple fringes and centres of power that comprise any society. The list of peoples that artists have worked with is endless. And for good reasons artists generally enjoy enormous trust. The work that we produce makes aspects of the world, of life, available, albeit it strangely so at times, for us all to consider.

Humans have been engaging in symbolic cultural activity for more than 80,000 years. I suspect it has always been necessary to come up with ways to withstand the weirdness of the world we find ourselves in, and further to try to get to grips with, or even love the world we have made for ourselves. We are the only species who kill each other because our ideas differ. Taking time to look at our selves is crucial. Art is a prism for considering the present, reimagining the past, framing the future, for asking what makes life meaningful. It is for thinking together about our unconscious commitments, our beliefs in regard to any number of subjects, identity, nationhood, beauty, justice, nature, technology and so on.

As a public we read books, watch films, see plays, visit exhibitions, not just because we want entertainment or time off from our problems, but because we want to be challenged, to examine the society we are a part of. So whilst artists can play an important part in seeding creativity throughout our communities, the Irish public deserves, not just wonderful days out and festivals that the arts can brilliantly provide, but other kinds of work.

So I welcome any investment the state makes in creativity. But I fervently hope to see more arms length support for the esoteric work that is much harder to describe in terms of its potential outcome when you are filling out a funding application, impossible to anticipate the way in which it quietly and profoundly resonates with audiences. And some of that work might in the short term not seem valuable, but may yet come define this epoch in decades or centuries to come. What is crucial, because it is what has been lost in this long period of cuts, is that we have a critical mass of artists of all ages living and making work here, making art that deals in uncertainty, that generously creates unique, powerful opportunities for everyone to reflect upon their own experiences.

I welcome any investment the state makes in creativity.

All artists require is some space to work and the means to get on with it. To make work that is thinking into the unknown, that produces weird sculptural effigies and explores new media, works like Strongbow: work that facilitates public discourse.

And if that work is facilitated, with generosity and trust, we could ask for and expect much more from Irish artists who are presently speaking, sadly under utilised.  When I left the National College of Art and Design, I had little clue of the precarious undertaking I had taken in deciding I had to be artist. I’ve been fortunate in the supports I’ve received over the years but I came of age as an artist when there were more resources to draw on.

If we don’t value people in our society who see the necessity of making the space and time for thinking about how we negotiate change and deal with difference, for taking beauty seriously, for creating work in an effort to love or to withstand the world and other people, little will remain of our time here than the evidence of our day to day efforts to just get by.

My name is Liz Nugent and I have the luxury of being one of the few full-time writers in Ireland. I have published three crime novels to critical and commercial success. I was first published at the age of 46. And although my books are classed as crime novels, I also document a social history of Ireland in the 70s and 80s when I grew up. I have lost count of how many languages into which I am translated but I know they include German, Korean and American.

But long before I was a writer, I worked in the arts in the theatre sector. In the beginning, I was an assistant stage manager on profit-share shows. There was no funding, and no profit. I remember a national tour in which I had to hitchhike from venue to venue because there was no money in the budget to put me on a train. So I stuck my thumb out at Maynooth at great personal risk to do a job for which I would not get paid.

Why did I do that? Because I loved it and because I believed in it. And when I found myself on the board of Fishamble Theatre Company almost thirty years later, and witnessed at first hand how incredibly hard this company worked on such tight shoestrings, I had to wonder with admiration at these artists who were now middle-aged like myself, and still doing it out of love and belief.

Eight years after my hitch-hiking days, I was touring the world with Riverdance as Production Stage Manager, in charge of a cast and crew of 100 people. Later though, I drifted into television into a low-paid admin role because I needed to get a mortgage and I could not do that while working in the precarious freelance world of theatre stage management.

Alongside my tv day job, I began to write, first a small nostalgic story for Sunday Miscellany, then an animation series for children for TG4, then a radio play, then a short story that was eventually short-listed for the Francis McManus radio competition.

I would not have been able to write any of this if it hadn’t been for the affordability of the Tyrone Guthrie Centre in Co Monaghan, a wonderful artists sanctuary funded by the Arts Council?

In my three weeks annual leave from work, I would escape to the magic place and it is there that I wrote most of my first novel Unravelling Oliver.

Thereafter, I won the inaugural Jack Harte Bursary from the Irish Writers Centre, (also funded by the Arts Council) which gave me two free (but invaluable) weeks at the Tyrone Guthrie Centre, where I worked on my second novel, Lying in Wait.

Fast forward to 2018 and a few weeks after my third novel goes to the top of the Bestsellers List, I am at the Bay Area Book Festival in Berkeley California talking to a large audience about Irish literature and the explosion in Irish female crime writing. This trip was thanks to Culture Ireland. I am hoping that Culture Ireland will step in to let me attend Los Gatos Irish Lit Festival and to allow me represent Ireland at the Iceland Noir Festival later this year.

You see, when I go out into the world with my books, I am not just representing Liz Nugent. I represent all Irish writers and artists. I advise international programmers on new up and coming theatre makers and writers. I try to send the ladder back down, to help the next generation up.

When I said earlier that I had the luxury of being a full-time writer, I don’t want you to get the wrong idea. I still live in a former council house and drive a 14 year old car. There is not much luxury, but there is peace of mind, there is the satisfaction of knowing that I am finally doing what I was destined to do. I would not have been able to achieve any of this without the direct and indirect support of government institutions.

I am not asking for more for me, not right now anyway, but I hope you will find it within your hearts and budgets to let the next generation of artists blossom, but maybe a bit earlier than I did.