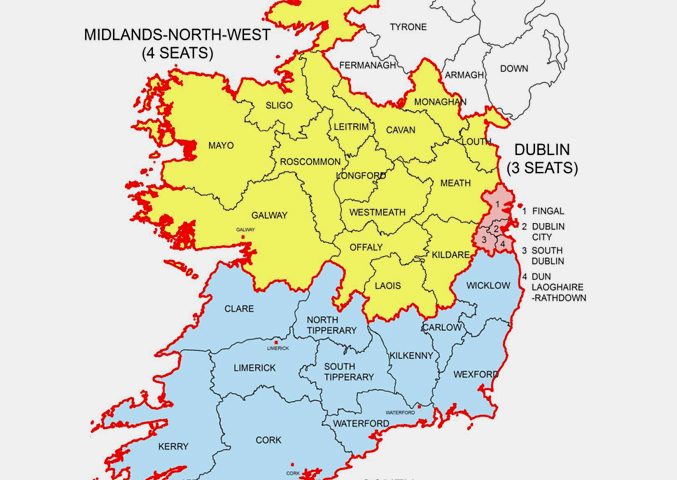 The European Parliament and Local Elections will be held on Friday 23 May 2014, polling will be between the hours of 7am and 10pm on that day.

The Department of the Environment, Community and Local Government, according to its own website, oversees the operation of the local government system and implements policy in relation to local government structures, functions, human resources and financing. Currently at county/city level, there are 29 County Councils, 5 City Councils, 5 Borough Councils and 75 Town Councils.

Changes to your local electoral area

European Parliament Elections – 11 MEPS to be elected in 3 constituencies

In summary, there is a sole Dublin constituency, while Leinster will be split into two. There will be a three-seat Dublin constituency consisting of Dun Laoghaire-Rathdown; Fingal and South Dublin; and the city of Dublin. A four-seat Midlands-North-West constituency with the counties of Cavan, Donegal, Galway, Kildare, Laois, Leitrim, Longford, Louth, Mayo, Meath, Monaghan, Offaly, Roscommon, Sligo and Westmeath. The four-seat South constituency will include the counties of Carlow, Clare, Cork, Kerry, Kilkenny, Limerick, Tipperary, Waterford, Wexford and Wicklow.
For more detail, see Report on European Parliament Constituencies.

Your elected representatives are there to represent you very year, not just in a general election one. Ask for a fair deal for the arts, arts organisations and artist, nothing more and nothing less.
To contact any elected representative in the Houses of the Oireachtas, email them at firstname.surname@oireachtas.ie or find their number in the Phone book.
List of Members of Dáil Éireann
List of Members of Seanad Éireann.