NCFA Activity from around the country 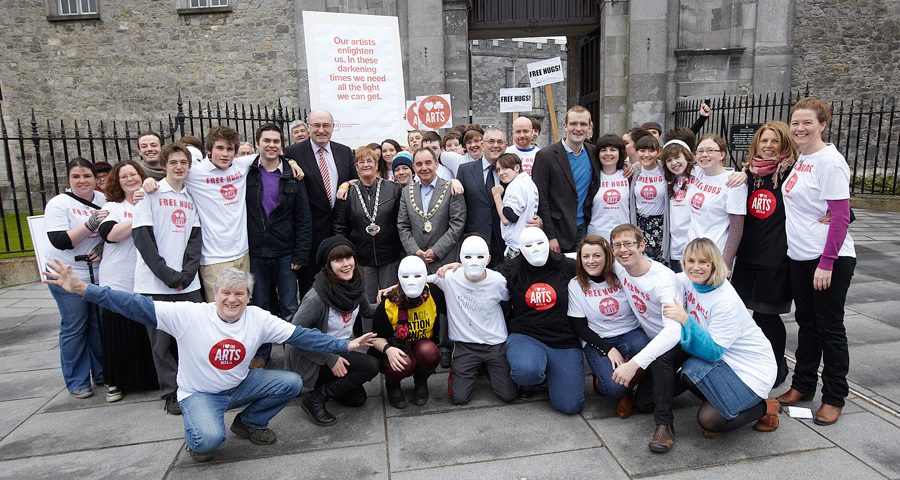 It’s time to take action before Budget Day on December 5th 2012. The arts are not only our livelihoods but an essential part of vibrant communities. Now is the time to lobby our elected representatives to ensure they know that funding for the arts in your local area needs to remain intact. If arts and culture are to play their role keeping communities vibrant, especially at the time of the upcoming Gathering and in the Decade of Commemorations, investment cannot be cut any further.

Here’s what members have been doing:

“Good campaign meeting with Minister Brendan Howlin today. Reassured independent voluntary board governance for National Institutions and follow up with Phil Hogan on importance to ringfence arts funding locally when new local authorities reform happens with merging of local town and county councils. Anna Walsh of Theatre Forum joined meeting as NCFA rep with Lucy Medlycott, Bui Bolg, Elizabeth Whyte, Wexford Arts Centre and Pat Jackman, independent Sound Designer/Arts Administrator. Ensure to let your local reps know about the great artistic work you are doing as an individual and as a group at any given opportunity so its importance in the community is known and supported.”

“The meeting, in brief, was a successful and thoughtful conversation with a public representative who was knowledgeable about and known to the local arts organisations. The arts locally, how they fit in nationally and finally how important the arts are to Ireland were all dealt with. As unfortunately the meeting was the day after the Government’s decision about the National Cultural Institutions, that was dealt with very briefly and the point was made that we were very disappointed.

The thrust of the meeting was to ensure that Jan O’Sullivan as a Labour minister and one person at the cabinet table was aware of what the ‘vibrant’ arts were delivering on very little resources and how important that work was – thence the importance of those resources. It was all very much framed in the context of what the arts are doing and delivering.

There was some discussion and some very frank concern expressed at the meeting about the lack of a plan, funding or a coordinator for Limerick’s year as a City of Culture.

Finally in the context of other sources of funding for the arts and an ongoing process of local government reform, the Minister agreed that as an outcome of the Limerick meeting I would write to her to initiate a policy level conversation on the role of local government and the arts between NCFA and her department.”

Dublin North West – November 14
Niamh Ní Chonchubhair of Axis Ballymun shared this response from John Lyons T.D.: “I fully appreciate the social and economic benefits of the arts and the concerns you expressed in respect of funding to the arts. I have now submitted a Parliamentary Question to the Minister for Arts, Heritage and the Gaeltacht to enquire about his plans to ensure continued investment in the arts, including the allocation of funding to the Arts Council and Local Authorities.”

Kerry South – November 15
Excerpt of letter to Minister Jimmy Deenihan shared with us by Dr Noelle Campbell-Sharpe, founder of The Cill Rialaig Project. (The full letter can be downloaded below.)  “Minister, you have a grave responsibility in your custodianship of the arts for Ireland at this time…it is imperative that this Government protect and stabilise our art infrastructures.”

The NCFA is keen to meet with Minister Deenihan to emphasise this point and will also write to members of the Cabinet stating the need for continued investment in the arts to sustain the arts infrastructure needed to keep communities vibrant.

Constituency Coordinator Vincent Dempsey reports: “Hugs and cuddles were offered in abundance on Friday Nov 16th when local artists took to the streets with their arms outstretched in an effort to encourage the general public to support the arts and support the campaign for continued investment in the arts.

At the end of the ‘hugging day’, NCFA met with local and national representatives and Minister for the Environment, Community and Local Government, Phil Hogan T.D., to discuss the campaign and emphasise the need for continued investment in the arts at local and community level.

You can watch a short video of the day’s events here.

Be active and be heard
Hundreds of you have already contacted your local TDs now, but we still need to sustain and increase these efforts. Spread the word.

Only 2 weeks left before Budget Day 2013
If you have had further engagement with any politicians in your area from any party, please let us know. Tell us what you are doing in your local area, send us the unique messages you are sharing about the importance and impact of the arts in your area.