Cultural Heritage and the politics of Gradgrind 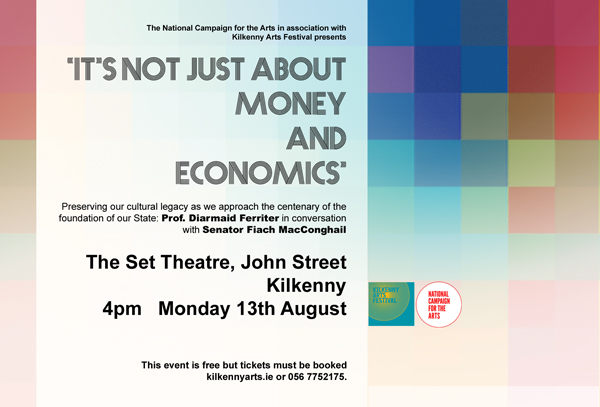 On Monday, 13th August, 2012 Kilkenny Arts Festival and the National Campaign for the Arts invite the arts community, local policy makers and members of the public with an interest in our cultural heritage, to participate in a public conversation to discuss the preservation of our cultural legacy in the light of current government policy, at Langton’s Set Theatre at 4pm.

From the Four Courts fire in 1922 to the Wood Quay campaign in the 1970s, threats to our cultural heritage are nothing new and now, in the grip of recession, the very survival of our national cultural institutions is threatened. Under current government proposals, thirteen key organisations including; galleries, libraries, archives, museums and Culture Ireland, are under critical review and may be rationalised, amalgamated or abolished in 2012. As we enter the ‘decade of centenaries’ and as the celebration of our heritage takes centre stage, Senator Fiach MacConghail talks with historian Diarmaid Ferriter about his decision to resign from the board of the National Library and his views on the important role culture and the arts play in our identity and our nation’s economic, social and civic recovery.

Local organiser of the National Campaign for the Arts, Vincent Dempsey, encourages people to attend and participate in this public conversation. “This event is particularly focused on the general public, and seeks to inject the oxygen of debate into a process of public service reform in the name of savings, which may seriously damage our cultural institutions”, he said.

For further information regarding this event visit http://www.kilkennyarts.ie