TDs that have been met by the NCFA 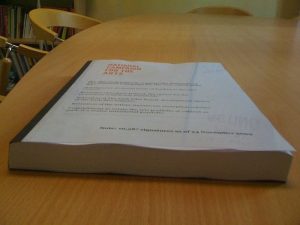 National Campaign For The Arts Meets Minister To Discuss Budget Impact On Arts And Present Petition Of 10,000 Signatures

November 2009 – A delegation from The National Campaign for the Arts (NCFA) met with Minister for Arts, Martin Cullen TD, this afternoon (Wed 25 Nov 2009) to discuss the devastating impact further cuts to the arts would have on the sector and called on Minister Cullen to bring the demands of the NCFA to the Cabinet.

The delegation, which was meeting the Minister in advance of the Budget 2010 announcement next month, also presented him with a petition, which, since it was posted online two weeks ago, has been signed by over 10,000 people. The petition supports the demands of the NCFA which are the retention of Culture Ireland and the Irish Film Board, the maintenance of existing levels of arts funding for the Arts Council and continued full representation of the arts at senior cabinet level.

Tania Banotti of Theatre Forum, Sarah Glennie of the Irish Film Institute, Gerry Godley of the Improvised Music Company and Fiach Mac Conghail of the Abbey Theatre were all part of the delegation.

Tania Banotti said, “The National Campaign for the Arts came together as an unprecedented union of all the different art disciplines in Ireland because not one of those areas is unaffected by the proposed cuts of the McCarthy Report and the devastation that will be caused by a severe slashing of arts funding. We are here for the long haul and we believe it necessary that our demands are recognised and understood by all in government. That is why we have urged the Minister to disclose those demands at the Cabinet table.”

Fiach Mac Conghail added, “This was an important and essential meeting. As a sector, we in the arts are not oblivious to the fact that cuts are going to happen across the board in Ireland in 2010. However, we don’t believe that the arts should take a hit from which it can never recover because then the country will not recover. The arts are fundamental to Ireland’s economic well-being, as the Minister himself highlighted at the Global Irish Economic Forum in Farmleigh in Dublin earlier this autumn, and the NCFA are fully committed to working with the Minister and his colleagues in government to help shape future public policy on the arts.”