Official Launch of the National Campaign for the Arts

Irish Artists, your country needs you 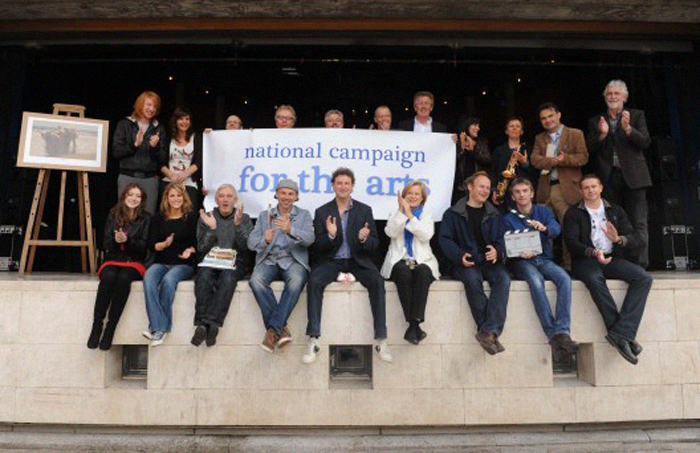 Some of Ireland’s most recognizable and respected artists came out today (Wednesday 23 September 2009) to launch THE NATIONAL CAMPAIGN FOR THE ARTS at the Ark, A Cultural Centre for Children, Eustace Street,Dublin 2.

Legendary singer, Mary Black, actress and star of In America and The Tudors, Sarah Bolger, comedian Risteard Cooper, singer/songwriter Damian Dempsey,   actress and novelist Amy Huberman, internationally acclaimed composer Bill Whelan and other luminaries of Ireland’s music, film, theatre, literary and visual arts industries were there to give their support to a campaign highlighting the value of the arts to Ireland’s economic and social recovery.

During a week in which the Ulster Bank Dublin Theatre Festival is kicking off its fifty-first year and an expected ½ million people around the country will enjoy Culture Night, the Campaign aims to put the importance of the arts centre stage.  It calls for the retention of Culture Ireland, the agency for the promotion of Irish arts worldwide and the Irish Film Board, both of which face closure following the recent recommendations of the McCarthy Report. It also calls for the maintenance of existing levels of arts funding for the Arts Council as well as full representation at senior cabinet level.

The National Campaign for the Arts was established as the first ever umbrella organization for the diverse arts’ sectors in Ireland and provides a voice for the country’s artists and arts organizations. It petitions to ensure that the arts are on local and national government agendas and welcomes an open debate on the arts as a vital part of contemporary Irish life.  Its membership has a national reach that  includes major festivals, venues, producers and representative organisations in visual arts, theatre, film, dance, music, literature, architecture and collaborative arts.