Artists and arts workers in Sligo unite to support the Campaign

Welcome to the National Campaign for the Arts Website 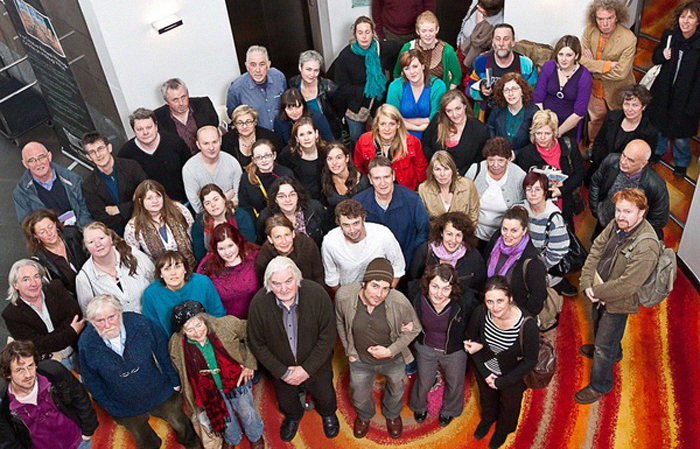 Sligo’s artists and arts workers came together today to protest against proposed funding cuts that could see this important cultural region diminished beyond repair.

Sligo-based writers Dermot Healy and Leland Bardwell and artists Sean McSweeney and Grace Weir were part of the gathering at Sligo’s Glasshouse Hotel today in support of The National Campaign for The Arts, launched to provide a voice for the arts and cultural sectors and to highlight the value of the arts to Ireland’s economic and social recovery.

As illustrated by the size of the gathering and the range of artists and organisations represented, Sligo has an incredibly strong and diverse arts infrastructure that has evolved in no small measure from its large population of artists who in turn contribute to the county’s innovative and diverse cultural ecology. Indeed the proliferation of arts and culture in Sligo has marked it on the world stage as a county that punches above its weight.

Sligo has an important network of arts organisations who have national and international reach, namely The Model, Blue Raincoat Theatre Company, The Hawk’s Well Theatre and Sligo Art Gallery, which act as core infrastructural pillars that support the tapestry of diverse artists and arts projects such as The Cairde Festival, Sligo Jazz project, Sligo Live, The Sligo Baroque Festival and Sligo Choral Festival together with The Cat and the Moon, The Yeats Society, Workhouse Studios, Joyn, County Sligo Youth Theatre, SLAM, Sligo Film Club, Mangiare Theatre and Teach Ban Nua. This wealth of cultural offering, in additional to the strong vision and access programme from Sligo’s Arts Service, all combine to make the region an attractive place in which to live, work, visit – and invest.

A recent study showed more than 11,000 people are employed in the region’s creative sector. The cuts to arts funding proposed in the recent McCarthy Report could see at least one local venue close and have a disastrous impact on plans for 2010 arts events in Sligo, subsequently delivering a lethal blow to local businesses.

Writer Dermot Healy commented: “Any cut back in Arts funding would be a catastrophe.  All of these groups depend on Arts funding to deliver workshops, magazines, readings and visual collaborations. The employees of all these Arts Groups and Associations and Arts Organisations are vital to the actual basic and fundamental structure of art in society, but also to the lives of those artists who depend upon them to keep the show on the road.”

The Campaign, which has the support of Emmy Award winner Dearbhla Walsh, Dervish musician Shane Mitchell, writers Dermot Healy and Leland Bardwell, artists Dorothy Cross, Sean McSweeney , Joe Walker, Grace Weir and Nick Miller, composer Ian Wilson and Sligo born film director Neil Jordan , among other, was launched in response to the McCarthy recommendations which include withdrawing funding to Culture Ireland and the Irish Film Board, the two agencies largely responsible for Ireland’s high international profile.   The campaign also calls for the maintenance of existing levels of arts funding for the Arts Council as well as full representation at senior cabinet level.

The gathering in Sligo is timely as the city has just celebrated its first “Culture Night” and the phenomenal success of the initiative has illustrated the transformative power of Arts and Culture in a time of recession.  The streets of Sligo were alive on Culture Night with thousands of people pouring into the city to take to the streets, to socialize and to take advantage of the diverse range of free events on offer. Sligo’s offering was one of the largest of the nationwide Culture Night programme, and illustrated the rich diversity of artistic life in the county.

The Cultural debate is not just one for the souls of the nation; there is very strong economic evidence to back the assertion that arts and culture can help pave the way out of a recession. National and European research (see below) is backed by recent regional research by the Western Development Commission (Creative West 2009) which confirms Sligo’s importance as a cultural centre in the Western Region which generates high quality employment (4.2% share of total employment in Sligo) and stimulates innovation in other sectors.

Sligo has a powerful reputation nationally, and abroad, as a county of creativity and innovation, with arts and culture playing a significant role in stimulating rural and regional development on a long-term sustainable basis. This can lead to investment in the county and is an important factor in attracting visitors to the region, perhaps the most important factor. At a national level Cultural Tourism is achieving an annual growth of 15%, three times the overall growth rate for tourism and is worth over €2billion to the economy annually. (Source Failte Ireland Survey of Overseas Travellers / CSO Travel & Tourism.)This represents a third of all business tourism revenue, highlighting that this sector is high yield with Cultural Tourism currently accounting for 6 in every 10 visitors to Ireland.

In a modern country, a healthy arts and music scene is a key element in keeping a community stimulated, energised and stable. The cuts to arts funding proposed in the Mc Carthy Report could have a disastrous impact on plans for 2010 arts events in Sligo and subsequently provide a lethal blow to local businesses. The local arts community recognises this and is particularly concerned about the long-term damage such drastic measures could have on cultural innovation and development for the city, region and an entire generation.

A view echoed in the words of artist Dorothy Cross, (whose work is represented in Sligo’s Niland Art Collection):   “Art promises like nature does. Sligo is known for its Art and Nature; both must be preserved” and writer Dermot Healy :  “It’s the future – not only the here and now- that suffers when the present turns selfish”.

The Economic Argument
A recent Irish Study from DKM finds that the cultural and creative sector is one of the most dynamic areas of the Irish economy, with a total economic impact in 2008 of €11.8 billion, or 7.6% of GDP.

A European report from KEA (The Economy of Culture in Europe , published in 2006 by The European Commission) finds culture and creativity are considered “vital factors in attracting talented individuals and investment. They also foster economic development, local regeneration and strengthen cultural diversity and social integration.”

Furthermore research shows that spending on cultural activities has a ‘multiplier effect’ of a factor of approx 1.5 on income and employment with regard to local economies.

The Western Development Commission (Creative West 2009) reports that there are 11,000 people employed in the creative industries in the western region and this sector is identified as having the most potential to retain existing jobs and create new employment opportunities. This research confirms Sligo’s importance as a vibrant cultural and creative centre in the Western Region, which generates high quality employment (4.2% share of total employment in Sligo), stimulates innovation in other sectors, plays an important social role and can stimulate regional development on a long term sustainable basis.